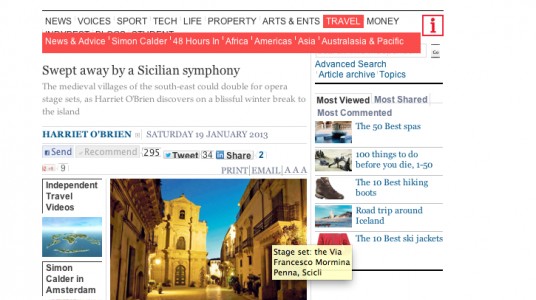 Amid all the swirls of wrought-iron balconies and flamboyant stonework, I half expected a window to fling open and an impassioned soprano to lean out giving full voice to an aria. Even though it was bustling with contemporary café life on a Saturday evening, Via Francesco Mormino Penna looked surreally like an opera stage set. Several small groups, for all the world like members of a crowd-scene chorus, were sitting out at a couple of restaurant terraces on the beautifully lit street, while up in the night sky two wonderfully illuminated façades of distant church buildings punctuated the darkness.

I had made my way to Scicli (pronounced “shickly”), in the south-east corner of Sicily, straight from Catania’s Vincenzo Bellini airport, driving for a couple of hours on ever quieter roads that the blackness of the winter evening imbued with a sense of lonely remoteness. I wound along the coast and then up into hills, before abruptly descending into this bright hub where it seemed that suddenly all human life had gathered. The party mood was all the more appealing for being entirely local: for all that winter temperatures are generally a happy 15C or more in the day, and at least 9C or so at night, there are unaccountably few visitors at this time of year.

I had come in quest of blue skies, bright sunshine – and sublime architecture. Scicli lies in Sicily’s remarkable Val di Noto, which became a World Heritage Site in June 2002. It’s a strikingly rugged area containing a string of extraordinary towns, phoenix-like places of great glory. Back in 1693, an earthquake reduced much of the human habitation here to rubble. Yet out of disaster came exuberant re-creation: great swathes of eight ancient towns were rapidly rebuilt in the prevailing, fabulously opulent, late Baroque style. Set at a natural crossroad of canyons, Scicli is particularly spectacular, the environmental drama around enhanced by theatrical urban planning.

The town looked sensational under a cobalt sky the next morning, its pinky-cream stone glowing in near melodramatic light. It was Sunday and the air was infused with the sound of church bells. Straggles of people were chatting in the two main squares, big men with small dogs on leads, a few ladies in black. A rapid ribbon of cyclists in stand-out shades of Lycra swooshed past the handsome town hall, trailed by a tiny old Fiat with spare bike wheels dwarfing its mini roof rack.

That town hall would look familiar to any viewers of the Montalbano television series (based on the novels by Andrea Camilleri), which has been helping to put Scicli and south-east Sicily firmly on the tourist map. On screen the building is the bullish detective’s police station.

It was my first port of call on a tour around town that day. I was staying nearby at an elegant 19th-century palazzo, now wonderfully refurbished as a nine-bedroom boutique hotel complete with original painted ceilings. At Hotel Novecento I’d been warmly welcomed the night before. “Sicilians take enormous pride in hospitality,” beamed the proprietor, Donatella Tognon.

The next morning, she offered to show me around town, accompanied by two other local residents. After the screen-star town hall we paused by the quirky, moustachioed faces decorating the exterior of 18th-century Palazzo Beneventano before heading to San Bartolomeo. It’s Scicli’s most fantastically showy church, said my companions as they showed me its ornate interior, home to a large nativity scene so exquisite it remains on display all year round.

Outside were other intriguing creations: we climbed an adjacent hill for a view over former cave dwellings cut into the limestone rock; amazingly, they were in everyday domestic use as recently as the 1950s. Then we meandered back through town dropping into several of Scicli’s numerous churches – San Ignazio the “mother” church; austerely spiritual Chiesa del Carmine; curving San Giovanni Evangelista; majestic San Michele. We finished our walk at the church-turned-museum of Santa Teresa where medieval frescos painstakingly brought down from the former Convent of the Rosary on a hill above town are displayed. The simplicity of the paintings makes a striking contrast to the riotous Baroque interior of the building.

The mix of medieval and Baroque worlds was beautifully evident again the next day at the town of Ragusa. I set off from Scicli in another great blast of morning sunshine, firmly advised by Donatella to follow roads to the lower town, known as Ibla, rather than the higher, more industrial sector. Low turned out to be a relative term. The road leads along an escarpment and suddenly presents a terrific view: draped over a hill in front of you is a jaw-dropping mass of terracotta roofs dotted with domes and spires.

Ragusa is divided into distinct parts because of the 1693 earthquake. After this disaster the wealthier inhabitants opted to create a new town on a ridge above their flattened old centre – and this is now trimmed with further, modern, additions. Many poorer residents, however, dug their heels in and during the early 18th century rebuilt their hill-town on the same spot, using pretty much the same street plans. So Ibla, or lower Ragusa, is in many ways still a medieval town, its buildings set along curving lanes. Shoehorned into the tiny streets are magnificent Baroque churches and a sprinkling of snazzy palazzi. The dome of the cathedral of San Giorgio appears suddenly at the end of a narrow lane. A sweeping palm-lined square magically opens out in front of this tall building.

I marvelled at the splendid balconies of Palazzo Cosentini, supported by intricately carved corbels. I admired the wedding cake façade of the church of San Giuseppe and the lovely bell tower of Santa Maria dell’Idria, topped with a little blue dome. Perhaps best of all was Giardino Ibleo at the foot of town, a beautifully planted public space with an impressive avenue of palms and walkways offering staggering views over the craggy countryside beyond.

Even in winter it would be an oversight to visit this part of Sicily without seeing something of the coast, so I headed south. I drove along empty roads fringed with cacti and great clusters of pampas grass, stopping at fishing villages: Donnalucata, whose natural harbour has been in use since Moorish times; pretty Sampieri and, just beyond it, the striking remains of the brick factory of Penna. At the busy port of Pozzalo I took in a magnificent blood-red sunset over the beach and the 15th-century military tower there, built to defend the district against raids from Saracen pirates.

Just a few kilometres inland, another ancient military defence tower is now a haven of a hotel. You bump over a small level crossing and then plunge along the rough road of an organic farm to reach Relais Torre Marabino. With seven bedrooms, beautifully tended grounds and one of the best restaurants in the area (locals flock here), it exudes informal charm. It offers epicurean adventures too, for the hotel’s parent company also owns an organic winery as well as the surrounding vegetable farmland. I enjoyed a tour and tasting at the Marabino vineyards nearby, learning how many of its vines are grown Sicilian-style as bushes rather than trained along wires, and sampling the strong flavours of its nero d’Avola and moscato grapes.

I was expecting to be less enthralled by a tour of the organic farm around the hotel. But the zeal of the manager, Roberto Giadone, was compelling. Tomatoes, courgettes, peppers suddenly offered an insight into the intrinsically Sicilian enjoyment of life. Music was audible too. Ah yes, Roberto explained, he’d found that the vegetables seemed to grow better to the strains of a soothing symphony. And did they like opera? I asked, thinking back to stage-set Scicli. Only the most melodious of arias, came the reply. 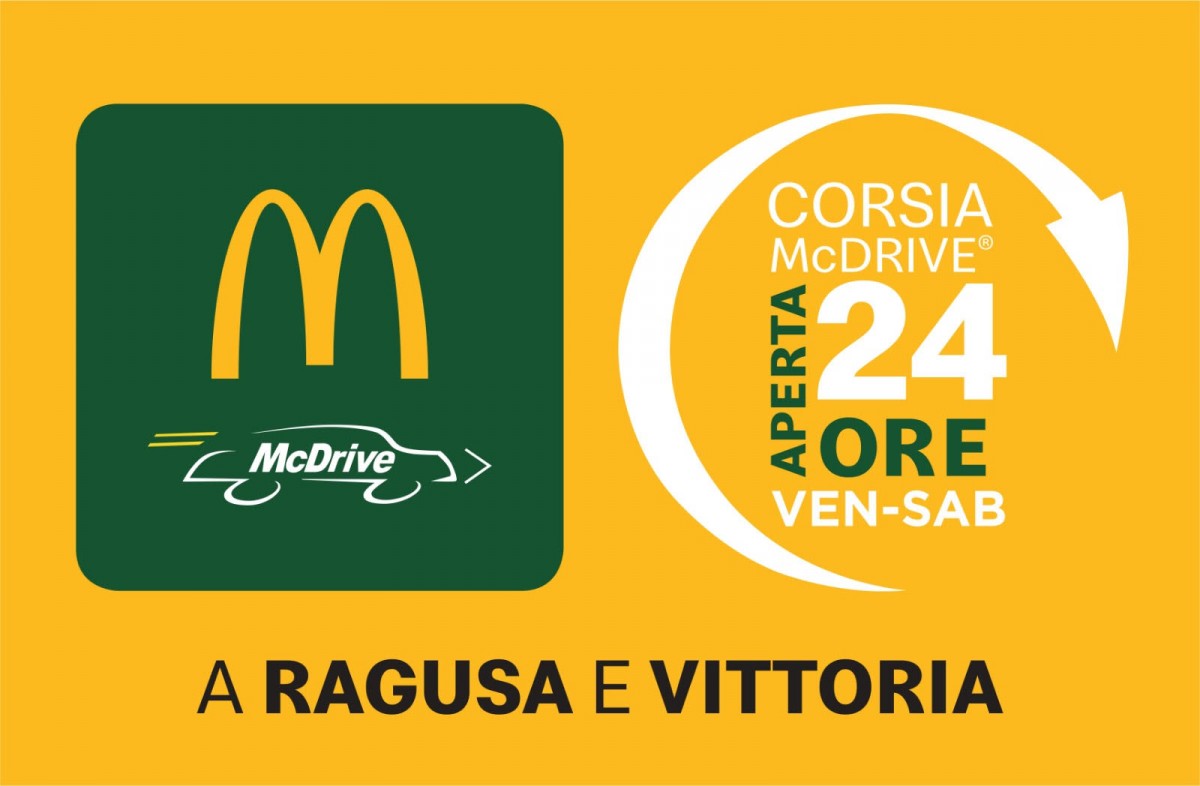 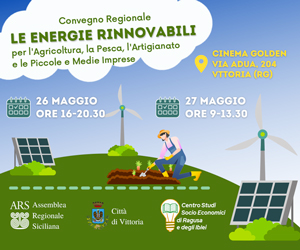